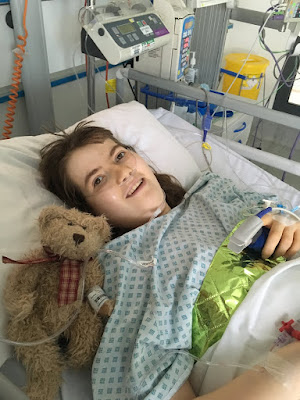 My daughter had to go cross country, along open-sided covered walkways, to get to the theatre for the removal of her spinal bolts and rods. The nurse laid a London Marathon-style foil blanket over her to keep her warm as she lay flat on the trundling, wheeled hospital bed. The glittering green covering made her look like a disco caterpillar.

I held it together until she went under. Right up until she drifted off, my girl was asking the anaesthetist whether she was totally sure that she wouldn't grind her teeth. If that was the uppermost worry in her mind, that was fine by me. But as she was whisked off by the bustling, efficient team in scrubs, I stepped outside with the nurse and crumpled, running through my whole repertoire of sobbing gulps and gulping sobs.

I felt better when my husband arrived and the two of us went for a drink. I could have demolished a triple brandy, but made do with a head-buzzing double espresso and a large black coffee. 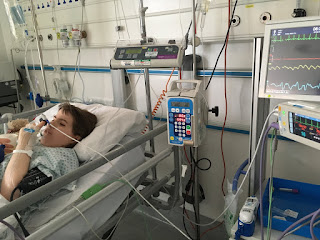 We headed to recovery, dizzy with relief. The surgeon told us everything had gone smoothly. I got to my girl's bedside, breathless. She was pale, puffy-faced, and spaced out, but she and Toffee Bear were safe. She wiggled her toes on request. Toffee Bear couldn't manage it, but then again he's always been a lazy bastard.

It's a couple of hours later, and we've had intermittent drunken loquaciousness, a couple of waves of tears, repetitive questioning, some declamatory finger-wagging, and even some tired smiles. In other words, she's been a post-operative, morphined-up version of herself.

Her chief concern has been the fact she missed breakfast and lunch because of her morning op. I've just been allowed to spoonfeed her a bowl of Weetabix, and you'd have thought it was nectar from the Gods.


Video is CHVRCHES - Recover
Posted by Drakeygirl at 16:39