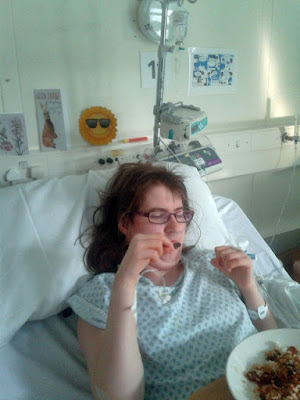 The physiotherapist eased my daughter into a sitting position, and let her breathe steadily for a few moments. She stationed herself on my girl’s right, I was instructed to go left, and between us, with guiding hands on her bum and under her arms, we helped her to her feet.

There she stood, 24 hours after they’d wheeled her through the theatre doors for her spinal surgery. A day, not even a full day, from the end of her op to remove the titanium metalwork in her back. It was only for a few seconds, but she took a couple of hesitant steps before she sat back down, and we helped her get back onto the bed for a rest. She squeezed the morphine pump, so I knew it had hurt.

We were in a room in the HDU (High Dependency Unit), which is where patients go after surgery when they leave the recovery room. With our own dedicated nurse, and the unit quiet due to there being no new admissions over the bank holiday weekend, it felt like my girl was getting VIP treatment. I can’t say the same for my squirmy night on another uncomfortable mini sofa bed (they all seem to be mini, so maybe I should face facts and admit perhaps it’s me who’s maxi) by my daughter’s bedside. But it’s kind of churlish to complain. I think my girl probably wins in the ‘who’s got the stiffest back’ stakes.

My grey-faced little stoic had done it again. A succession of medical staff throughout the day did the same double take when they heard she’d already managed to stand up.

It wasn’t long before we were given the go-ahead to return to the ward. The porters trundled her bed back to her space on the adolescent ward, and another stage was complete.

By the afternoon, the colour was returning to my daughter’s face and she was voluntarily demonstrating to the physio (who was passing, having just seen another patient on the ward) how she could lift her legs and hold them three inches above the bed as she lay flat. This was jumping ahead from the ‘wiggle your feet’, and ‘raise your knees’ exercises she’d been told to do.

Her dad turned up with her little brother in tow. My boy had been warned that his sister would still be delicate, and that he was not to jump on the bed under any circumstances, so he stood by her bedside, giving her a wide-eyed look. I gave him a tour of the various tubes and machines (less of them now), explaining what they did. He was particularly fascinated with the lower leg inflatable massager thingies* (*not their technical name), and his sister’s ‘giant bag of wee’, the latter, leading, inevitably, to an excitable discussion about poo. Everything with that boy leads to an excitable discussion about poo, but I suppose I should be thankful that at least it was relevant.

For now, I’m home. I’ve just watched Indiana Jones with the little swashbuckler, and put him to bed. I’ve got a few pit-stop style things to sort, but I’ll be hitting my own lovely, lovely bed soon, for a proper night’s sleep. My husband’s feet will be sticking out of the pull-out bed by my girl’s side tonight. (He’s 6ft 2in, so they really will). We’ll switch tomorrow. I'm missing him. The times we have to tag team are the times I most need him close.

There was one final amazing and impressive occurrence for the day. I got an email with a photo attachment, saying my daughter had managed to sit up and eat her tea, feeding herself. The facts of the message weren't what shocked me, though. No, the astonishing thing was that my luddite husband had sent me an email for the first time ever.