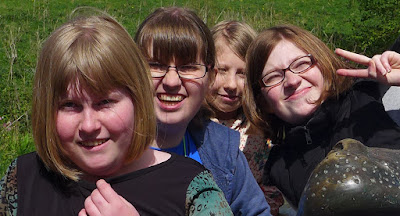 We arrived home late last night, feeling like dumbphones with only 1% battery life left.
We shoehorned the kids into bed, sank into the sofa cushions, chinked our mugs of tea together, then said ‘sod it!’ and opened the bottle of wine we’d won in the tombola. You don’t always need a proprietary charger to top up. 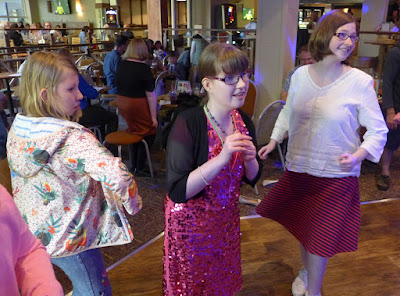 The weekend was worth celebrating. At the last minute, after changes to our daughter’s planned operation date, we’d been able to attend the PWSA UK (Prader-Willi Syndrome Association UK) family holiday in the Lake District. And we had, indeed, attended the heck out of it.

Fifteen children, young people, and adults with PWS (ranging in age from six to 38) and 29 assorted mums, dads, siblings, carers, and PWSA UK staff had gathered together in a lakeside holiday camp at Windemere.

We were a crew. A motley, out of the ordinary crew, but a crew all the same.

There were many highlights.

Thanks to a whispered warning from our admirable Admirals, Maggie and Sharon from PWSA UK, we did an urgent clearing away of the complimentary chocolate coins and Flumps left on the pillows of our caravans by well-meaning holiday park staff.

My girl, the teenager with PWS who’d been video calling her little gang of fellow PWS girls in advance, met up with her posse. There was shuffling, shyness, excitement, presents, awkwardness, half hugs, and lots of smiles. We let them loose in the caravan park arcade with a mountain of 10ps and a coin hungry grabber machine. Later, they sang along to the songs in the game of music bingo.

If you were my daughter, the best bit of Saturday’s safari zoo visit was a giant otter chomping on a big fish just inches away from us behind a glass barrier. If you were my son, it was a monkey having a poo. But my boy, my funny, bright, cheeky little monster of a boy, actually behaved quite impeccably throughout our stay. He was ‘yes please’-ing and ‘no-fankyou’-ing so often and so politely, that he sounded exactly like Kathy Burke as Perry, in Harry Enfield’s Kevin The Teenager sketches. I dreamed that one of the other mums was called Mrs Paterson.

In the clubhouse, Scottish Brandon, a Dunfermine-supporting 28-year-old with PWS, strode onto the dance floor to do a spectacular solo sing and march-along to I’m Gonna Be (500 Miles). Reader, I joined him. Reader, gin may have been involved.

My girl didn’t want to dance when she saw her PWSBFF (PWS Best Friend Forever) was sitting down. “I’m going to talk to her instead,” she told me solemnly. She meandered over to her buddy, ignored the three empty chairs next to her, and sat in the one seat nearby that had its back to her friend. I looked at the scene: she was quite happy, her pal was quite happy and they thought it was perfectly normal for her to choose the only seat facing the other way. With a spot of gentle suggestion, my daughter turned the seat around, and the pair sat in companionable silence. Later, they danced. There was a lot of giggling.

We took over the camp swimming pool on Sunday, the more warm-blooded of us remaining in the not terribly warm water, others sneaking out for a quick sauna blast.

There were meltdowns and anxieties and misunderstandings and the usual food faffs, but those specific to our weekend home, Deer Park Caravan No 44, were minor. 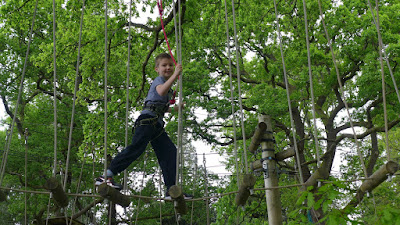 My girl and her dad sat at a table in a lakeside playground on Sunday afternoon, with the remaining hardcore of the PWS crew. I could see them from above, just through the trees. Inexplicably, possibly hypnotised by golden glow of sunshine and general happiness, I’d volunteered to accompany my seven-year old lad on a Treetop Walk, attached by a safety line to wobbly ropes and bridges seven metres above the earth. There was just the small matter of the 250 metre zip wire plummet to end the aerial challenge. And plummet my fat arse did, all the way to the finish.


The weekend had zipped by. But our safety net hadn’t been wedgie-inducing harnesses. It had been eachother.