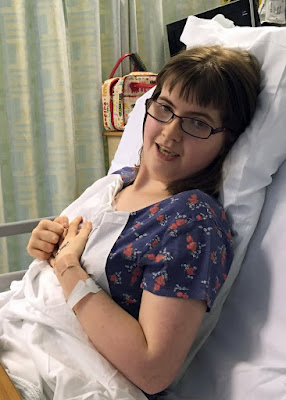 My daughter spent another shaky morning coping with PWS anxieties as she continued to recover in hospital after Friday’s spinal surgery.

I’d ordered her meals, you see. Breakfast, lunch, and tea. But having been told she might be going home today, she said we should cancel the latter two. It wasn’t a suggestion - she was insistent. The bee was well and truly trapped, buzzing in her bonnet.

I explained that we could easily cancel later if she was discharged. And that in hospitals, this happens all the time. And that the next patient in her bed might need her meals. And that it was better to have it in case she was still here. And that she’d been even more upset if everyone else had a dinner and she didn’t. And then I realised that of course she’d stopped listening before I’d aired even the first of these salient points, and was in floods of tears again.

I told her I was going to cancel her food, walked around the corner, twiddled my thumbs, informed nurses of my pretence (telling them under no circumstances to cancel ANYTHING), and returned to her bedside.

“It’s done. I’ve cancelled your meals, just like you wanted me to, OK?”

She looked at me. “But what if I’m still here?” And crumpled again.

It was a repeat of yesterday’s waves of emotion. They crashed over her again and again as I chivvied her along to complete her tick-box of tasks for the day (getting in and out of bed, walking to the loo, walking up and down a set of stairs in the school room, and getting into the wheelchair for the porter to take her to the X-Ray department). I told one concerned nurse that her upset definitely wasn’t pain meltdown, it was brain meltdown, and ‘getting on with stuff’ was really the best tactic. When emotions get the better of my daughter, her tired distress simply has to wash away by itself, and the only effective thing anyone can really do is to wait it out. “We might as well do what we need to do in the meantime,” I explained. So we did.

I should probably point out that this kind of cruel-to-be-kind parenting includes a fair dollop of bluster on my part. It was a long, hard morning, and I ended up outside, with my head resting against the plexiglass of the covered walkway as the rain pelted against on the other side, taking deep breaths and fighting back my own waves.

By lunchtime (yes, lunchtime, the lunch that I ordered against orders, and that my daughter tucked into with gusto, eyeing me up as clouds of smug ‘I told you’-ness floated off me), she was back to her smiley self. Still stiff and sore, but giggly as we sat and played a game of Uno with a member of the play team.

And the good news is, she’s signed off by doctors and the physio, and her meds are bagged and ready. She can come home. Well, (and this is something which my boy thinks is the greatest reason EVER), she can come home, but only after she’s had a poo.

And, as you can probably guess, despite helpings of prune juice, laxatives, and hot peppermint tea, there is still no sign of the Captain’s log being updated. *Insert joke about 'Klingons on the starboard bow' here*.

My husband has signed in for the Night Shite Shift. I have actually run away and returned home for the night, leaving him to face tomorrow’s impending unholy trinity of ‘WHICH DAY AM I GOING HOME?/SHOULD I ORDER MEALS OR NOT?/WHY CAN’T I POO?’.

Never, in the field of human conflict was so much owed by so many for one poo.

Song is Chuck Berry - Too Pooped To Pop
Posted by Drakeygirl at 22:46