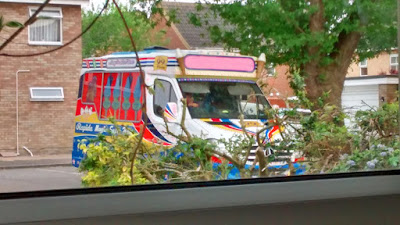 I have a nemesis.

My antagonist - let’s call him Mr Softee - appears outside my house almost every day, with his chimes chiming.

When you have a child with Prader-Willi Syndrome, this is not a good thing. People with PWS - with their insatiable appetite, obsession with food, and need for a strictly controlled healthy diet - don’t need brightly-coloured, fattening food-containing vehicles pulling up outside their window. Brightly-coloured, fattening food-containing vehicles WITH CHIMES.

My nemesis been doing this for ages. The reason is inexplicable because I have never once seen any of my neighbours buy an ice cream. He sounds his tune (of course it’s that ‘A Pizza Hut, a pizza hut, Kentucky Fried Chicken and a Pizza Hut’ one, which only compounds the issue), parks for a few seconds, turns round, and drives back out of our road, not giving anyone the chance to get out of their house and go and buy anything. So why sound the farking chimes?

I know there’s not enough time to get to the van because believe me, I’ve tried. The closest I got was chasing down the road just as he turned out of the close. I was trying to get to him to ask him why he comes, why he chimes, and if he could possibly do it somewhere else so that he doesn’t put the idea of ice cream into my daughter’s head at 6.45pm at night.

I might get a deck chair out tomorrow. I might station myself there, and tell him that this patch is no longer safe. That he can flake off, or risk getting one in the Nobbly Bobblies.