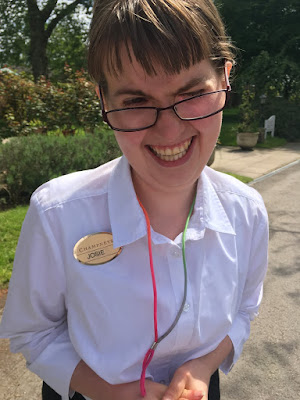 My daughter has worked out the world of work.

She and a fellow pupil have been undertaking work experience one morning a week at a posh health spa. Accompanied by their teaching assistant, they’ve been shadowing and assisting staff. Their duties have ranged from cleaning the bedrooms, sorting the laundry, helping in the café, and folding leaflets in the office.

The spa staff were very kind from the start. My daughter came back from her interview with free samples of shower gel and posh soaps, which the ‘nice lady’ had told her to keep for herself and ‘under no circumstances‘ let Mum nab them.

“Don’t think you get presents at every interview, sweetheart,” I told her. “Why not?” was her reply. (Yes, why not? Sometimes I think the world would be a much better place if we all followed her particular brand of logic).

The first week was her favourite. The nice lady had called the school, apologising profusely because she couldn’t be there for the first day. “Can they start properly next Thursday? And please feel free to come along today anyway, but just use the facilities instead.” And so it was that the teaching assistant, my girl, and her classmate ended up going swimming, hopping into the jacuzzi and having a toasty little sauna session, before heading back to school.

The next week, the work started in earnest. And every Thursday since, she’s been getting herself dressed up in black and white (a smart pair of black trousers and a crisp white shirt, with some black Sketchers to keep her feet comfy) and spending the morning learning about the workplace. The Sketchers were a substitution, swapped sharpish after her smart patent flats gave her horrendous blisters the first week, which she kept entirely quiet about until I took off her bloody socks that evening. That PWS high pain threshold thing is pretty mind-boggling, sometimes.

My girl is very proud of her efforts. “My teaching assistant said I was very grown up and she trusted me enough to leave me with the member of staff on my own, because she knew I wouldn’t be silly and keep sitting on the beds, like NAME REDACTED did,” she explained.

She looked at me and grinned. “And I can be trusted, Mum. Not like NAME REDACTED who got the sack from their work experience because of being rude and attitude. Can you believe it?” I'd met NAME REDACTED, so I could actually believe it, quite readily.

Things have run smoothly since, with some hiccups navigated well. "They offered me a biscuit when I had a cup of tea and I said 'no. I'm not allowed'. I did well, didn't I?"

The only thing I wish hadn't happened was staff informing my daughter that she'd been cleaning up the bedroom of somebody famous: Cindy Beale from Eastenders. Now I vaguely remember Michelle Collins being Cindy way back in the day, but I haven't watched the soap in years. Apparently there's another Cindy in it now, and my girl got in a pickle about exactly which Cindy it was, who was who, who had stayed, who I meant, who she meant, and I can't even be bothered to go into the exact ins and outs of it, but put it this way, that's five hours of conversation that my life would have been better without.

Cindy effing Beale aside, the experience has so far been a success. I asked my girl what she thought of her work placement now that she'd been doing it a few weeks.


“The housekeeping is all right, I suppose, but it’s very tiring,” she explained. “I don’t think I’d want to do that for a job. It’s really too much like hard work.”


Song is The Godfathers - Birth, School, Work, Death
Posted by Drakeygirl at 23:01